Code Eve explains that in the beginning, Dragonoid and Dharaknoid had battled each other and the result split the universe in two (Dragonoid's half formed into Vestroia and Dharaknoid's half created Neathia and Gundalia) which is why she had brought them to a mid dimension to battle, so no innocents would come to harm. Drago struggles against Dharak, and is knocked out and reverts to a primal state, relying solely on instinct, but Dan manages to snap him out of it. Meanwhile, everyone awakens after being defeated by Dharak and Linehalt is upset at the devastation so he uses his Forbidden Power to restore the war torn Neathia. Drago eventually manages to defeat Dharak and they are all returned to Neathia. However, Barodius decides to take the Sacred Orb's power for himself but its power is too much for Dharak to take in and they are destroyed. Code Eve awards Drago the Sacred Orb's power and he evolves into Titanium Dragonoid. With the war finally over, Nurzak, Ren, and the rest of his team create a formal alliance with the Neathians leave to form a new government on Gundalia. Dan, Drago, Marucho, Shun, and Jake return to Earth, and say goodbye to the Neathians as well as Akwimos, Hawktor, and Coredem (who must stay on Neathia). The four Brawlers return to Earth and are greeted by Julie and Dan's mom. Later, they return to Bakugan Interspace, where everything has returned to normal and Dan ends up battling Koji. 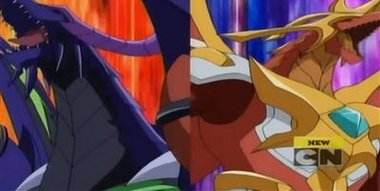