Ash faces off against Kahuna Hala in his first grand trial! His Rowlet defeats Hala’s Crabrawler, but it’s so exhausted afterward that it falls asleep in midair! Hala’s next Pokémon is the powerful Hariyama, who withstands every attack Pikachu tries. Hala unleashes the Fighting-type Z-Move, All-Out Pummeling—but thanks to Quick Attack, Pikachu dodges every hit. Then Ash’s own Z-Move, Breakneck Blitz, overwhelms Hariyama and wins the grand trial! 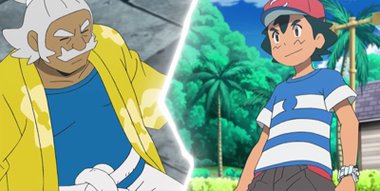