Battling the Beast Within!

While battling Tapu Koko, Ash and Pikachu suddenly find themselves in an unfamiliar place inhabited by a menacing Ultra Beast known as Guzzlord! Guzzlord’s power is fearsome, but a mysterious man named Dia—accompanied by the Mythical Pokémon Zeraora—comes to our heroes’ aid. Ash wants to help Dia reclaim his home from Guzzlord’s destructive wrath, but after Dia defeats Ash in a test battle, our hero relents. He and Pikachu must return to their own home, but how? Dia offers them shelter for the night, but on the way, they discover an abandoned Pokémon School! What could all of this mean? 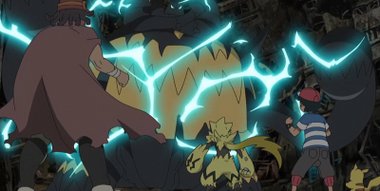