OVNI(s), plus on regarde plus on a envie d’y croire. Seulement sur CANAL+.

Aiming for the Top Floor!

On day two in Malie City, our heroes look forward to battling at the Kantonian Gym—especially Ash! But first they have to complete a series of challenges on their way to the top of the Gym tower. Ash and Kiawe reach the top and meet Gym Leader Ryuki, who claims to be a rock-and-roll star. Ryuki’s unorthodox battle style is confusing, and Kiawe and Marowak are quickly left unable to battle. But when Ash’s challenge turns into a Double Battle, Rowlet learns Brave Bird just in time to help Meltan! Ash wins the battle and the Kantonian Gym badge…which Meltan proceeds to eat! 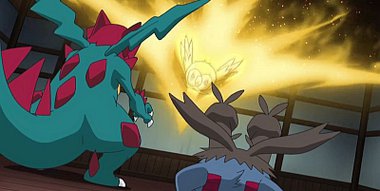 why can i not watch it