Spying for the Big Guy!

When Team Rocket receives a call from Headquarters, they come to regret their previous claim to have caught Bewear, as Matori tells them to send the Pokémon to Giovanni right away. But, of course, they haven’t actually caught Bewear—if anything, Bewear has caught them. Panic ensues when Matori arrives in Alola, but Jessie, James, and Meowth convince her that they need Bewear’s help to catch an even more impressive Pokémon. Eventually, Matori changes plans and tries to steal Stufful instead, but a disguised Meowth thwarts her plan by taking the little Pokémon’s place. Then, just in the nick of time, Bewear swoops in to take Meowth back home! 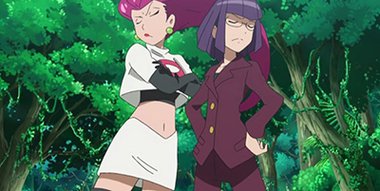