Battling on the Wing!

The Alola Pokémon League quarterfinals continue at a lightning pace, and Ash and Rowlet are in the midst of their battle with Hau and Decidueye. The attacks fly furiously—just like the competitors themselves—until it appears that Rowlet is unable to battle. But Hala notices that Rowlet hasn’t lost yet…it’s actually just sleeping! The battle restarts, and after mastering a new move, Rowlet ends up victorious! Then, Kiawe and Charizard face off against Sophocles and Vikavolt, and the latter two successfully pull off a Z-Move—will Charizard be able to escape the devastating attack?

Next episode
S18E134 - The Road to the Semifinals! 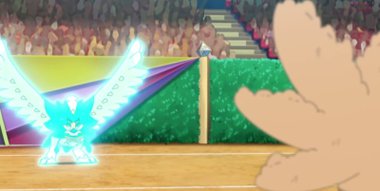