The Road to the Semifinals!

As the Alola Pokémon League quarterfinals rage on, Kiawe and Charizard face off against Sophocles and Vikavolt in the third battle. Both sides show impressive offense and defense, making it clear they’ve trained hard. But Vikavolt’s Wild Charge attack isn’t enough to stop Charizard’s Supersonic Skystrike Z-Move, and Kiawe and Charizard end up on top! In the fourth match, Lana and Primarina battle Guzma and Golisopod, but Guzma’s intense battling style takes Lana and Primarina by surprise. Despite a valiant effort, Primarina takes significant damage and loses the battle, but everyone agrees Guzma won fair and square. Next up are the semifinals: Kiawe versus Gladion and Ash versus Guzma! 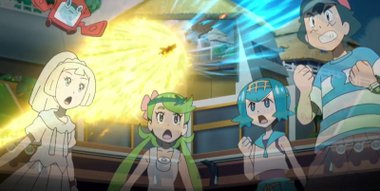