The Wisdom Not to Run!‎

In the second half of the Alola Pokémon League semifinals, Ash is battling Guzma, whose Golisopod had previously fled the match—resulting in the defeat of Guzma’s other partner, Scizor. With Golisopod back on the battlefield, Guzma begins reliving painful memories of past conflicts and his strained relationship with Professor Kukui. His frustration builds to a fever pitch, but it’s not enough to stop Ash and Pikachu from ruining his “undefeated” record and winning the match. After the battle, though, Plumeria and the Team Skull Grunts express admiration for his effort—giving him the strength to keep going despite his loss. Next up are the finals: Ash versus Gladion! 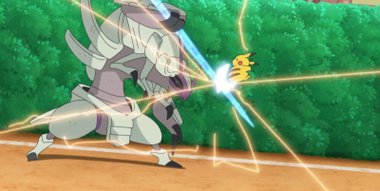