The Ultra Guardians, along with Faba and Professor Kukui, are attempting to return The Blinding One to its original form! As Necrozma in its “UB Black” form, it’s holding Solgaleo captive and threatening Poipole’s home world. Our heroes have been attempting to “feed” Necrozma with Z-Power to restore its light, but it’s not enough. That’s when the people of Alola band together to send their own power to Necrozma—and it works! The Blinding One is restored, and Solgaleo is released. Poipole’s world is renewed, too, and Poipole decides to stay behind to protect it. As a goodbye present, it draws a loving portrait of Ash and Pikachu!

Next episode
S18E91 - A Plethora of Pikachu! 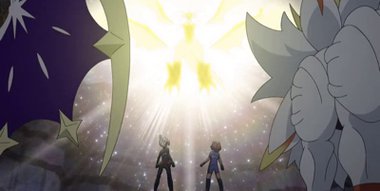