When Rui assaults him with his Blood Demon Art, Tanjiro braces himself for certain death. As his life flashes before his eyes, he suddenly remembers his father's dance, the kagura, and unleashes a new, non-Water Breathing attack. Hinokami Kagura Dance. Knowing that he’ll be receiving a simultaneous blow from the demon, he uses his new move to slice off Rui’s head. As Tanjiro crawls towards Nezuko, who lies on the ground, riddled with wounds, someone appears before him.

Next episode
S01E21 - Against Corps Rules 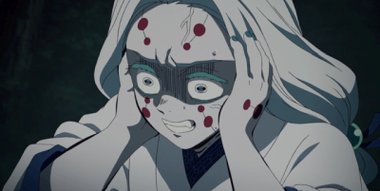 S01E08 - The Smell of Enchanting Blood

S01E13 - Something More Important Than Life

S01E14 - The House With the Wisteria Family Crest

S01E16 - Letting Someone Else Go First