A lot of convicts are conviently let out of prison a few years before they should by the mysterious â€˜Athena'. THe Bugs team go to investigate about the third man to be let out of prison, a Mr Flood. However, after they confront him, he escapes and runs to the carpark, closly followed by Alex, who loses him. Suddenly, he runs at her, determined to throw her off the side of the parking lot and she finds herself throwing him iff instead (by accident, of course). So, they decide that Beckett will take his place and he is taken to a place where he has to make a bomb to get through a steel door. With Ros telling him exactly what to do and with the aid of a â€˜neat' pair of glasses that enable Ros to see what he is doing, he makes it and finallly decides toi tell Ros who he feels, saying that he was jealous about her and Channing. But the communications go down and he realises that she didn't hear him. He is just talking to himself, saying that its probably a good thing that she doesn't know ho 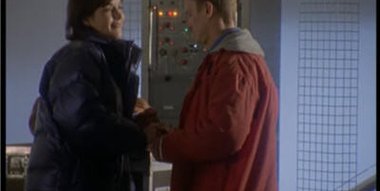