The hotel owners leave the examinees stranded on the island. A map is found indicating another island nearby, and part of the group sets out immediately to find it, dying when a storm hits. Hanzo and Kurapika sense danger and are elected leaders of the people who stay. They learn of a storm that comes in daily waves, the second of which will submerge the island, so they have one day to escape. 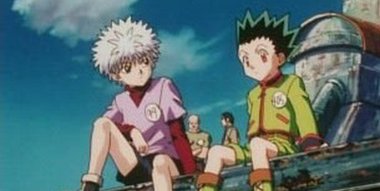