The Mightiest of Heroes!

Akira Akatsuki is excited to learn that his father, Nozomu, has completed his two year project for Stark International and has invited him and his older brother, Hikaru, to the Raft. After narrowly missing their flight, Akira and Hikaru are escorted to the Raft by Pepper Potts, courtesy of Tony Stark. During this time, a special presentation on the Raft is being held with several superheroes and VIPs in attendance, including three children, Edward Grant, Chris Taylor, and Jessica Shannon. Upon reuniting with his father, Akira is not particular happy that Tony is taking credit for Nozomu's project, the DISK system, which is designed for capturing supervillains, though Nozomu's assistant, Peter Parker, assures Akira it is because they wanted to protect them. Unbeknownst to anyone, mysterious characters sneak into the cells of the supervillains and help them escape by storing them inside the aforementioned DISKs. Whilst Edward, Chris, and Jessica sneak off to try and get closer to their favorite superheroes, Loki suddenly appears above the Raft and uses the DISKs to unleash supervillains all over the island. When Akira, Hikaru, and Nozomu are attacked by the Crimson Dynamo, who is looking for an 'installer', they are assisted by the arrival of Spider-Man. 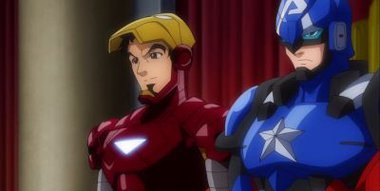