Thirty years after episode four, the borders between 1.0 and 2.0 have been erased completely and it is now possible to "download" things into the real world. Rin took 25 years to regenerate her body and suffered retrograde amnesia in process. Teruki became a successful businessman and Mimi, a Buddhist nun. Meanwhile, Eipos disguised Laura as Rin and made her hunt immortals for their time spores. The episode begins with Teruki's daughter Mishio discovering his records of Rin and by chance, meeting her amnesiac self. Rin is working for James & Will company, whose CEO is an immortal and is soon killed by Laura. Mishio finds her body, and thinking that Rin killed her, starts following her around. She witnesses a man named Ihiko propose to Rin, which she refuses, telling him of her amnesia. After Mishio asks Teruki about Rin, he finds her but decides that it's better for her painful memories not to return and doesn't contact her. He then finds Mimi who tells him that Rin is apparently hunting immortals. Meanwhile, Rin accepts Ihiko's new proposal and the two make love, when Laura attacks and kills them both. This returns Rin's memories and she escapes with Mishio to Teruki's estate. After a conversation with him, Rin and Mishio take a train to Kyoto, where Mimi's temple is located. Meanwhile, Mimi invites three other immortals, anticipating Laura's attack, but Laura brings angels with her who proceed to devour them. Rin arrives and defeats Laura and the angels, only to witness Mimi raped by Eipos. Eipos is then revealed to be an hermaphrodite god and removes Rin's time spore, presumably killing her. 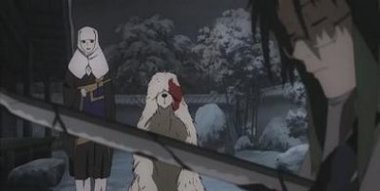