Zoro's battle with Pica continues as Luffy and Viola move forward. Meanwhile, the tower elevator makes it to the palace first floor as Lao G continues to attack Thunder Soldier. After Robin lures Trebol out of the Officer Tower, Leo runs in and throws the Tatababasco in Sugar's bowl, only for her to see through its trick and toss it away. The dwarves charge in attempt to attack her, but she transforms them into toys. Sugar then calls Trebol and warns him of the attack, so Trebol catches a ship with his powers and tosses it to break open the tower.

Next episode
S17E44 - The Last Light! The Secret of Our Captain! 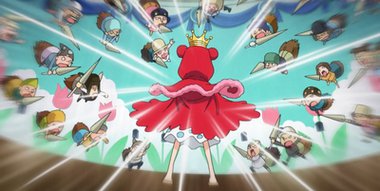