On the Eve of the flight, Louise learns of Shepard’s affair in Tijuana. Trudy watches Gordo crack a joke about women astronauts on television. Glenn awaits the humiliating moment when the world will finally learn he won’t be first. Tensions reach a breaking point when Shepard and Glenn are forced together in a pressure cooker of weather delays, marital discord, and a circus of reporters. 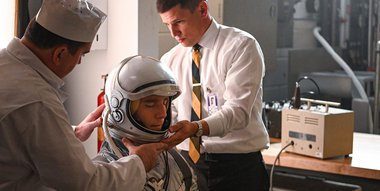