Overdrive: The King of Distortion 2

Teratsuki Kyouichirou and a pregnant woman sit drinking in a bar, and he offers her money if she keeps the child, even though she does not know who the father is. Some time later she gives birth to Makoto Hashizaka and she is shown to be the same woman waiting in the queue earlier with her son. Later, Sakiko a girl trapped in the Moon Temple meets her dead school friend Hina along a railway line and apologises for offending her years ago. Habara Kentarou meets Nagi Kirima in a café who warn him about his computer hacking activities. However, Habara realizes that it is an illusion and that they are still in the Moon Temple. Habara wakes himself up and finds that everyone in the temple is unconscious, all having their own dreams influenced by the King of Distortion which he suspects is part of Teratsuki's original plan.

Next episode
S01E16 - Overdrive: The King of Distortion 3 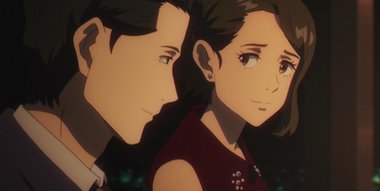