Today is the first day of the rest of Earl Hickey's life. After coming into a $100,000 scratch-off lottery ticket and losing it just as fast upon being hit by a car, Earl has an epiphany in the hospital--to make up for all the terrible things he's done in the past. With his brother Randy and a motel maid named Catalina, Earl writes up a list of every misdeed he was a part of. Earl sets out to do just that, starting with #64--Kenny James, a boy he picked on in elementary school. Recap When we meet Earl Hickey, he describes himself as "that guy you see going into the convenience store when you stop off in that little town on the way to Grandma's house--sorta shifty looking fellow who buys a pack of smokes, a couple lotto scratchers and a tallboy at 10 in the morning." He's a petty thief who proceeds to steal some CDs and a flag from a van parked outside of the aforementioned convenience store. Earl's narration introduces us to Joy, his unfaithful wife of, presumably, six years. He also introduces his two children (neither of which he fathered), Dodge and Earl Jr, and his brother Randy. The narration montage also introduces Darnell, an employee at Ernie's Crab Shack and also the father of Earl Jr. This all brings us to three weeks ago. Earl gets his due in the form of a $100,000 scratch off ticket... only to promptly lose it when he runs into traffic and gets hit by a car. He wakes up in a hospital with an injured leg and neck, a morphine drip, and divorce papers from Joy. While flipping channels on the television, Earl stops on Carson Daly's late night talk show. Carson recites his philosophy on karma and it inspires an epiphany in Earl. After he's released, he and Randy get set up in a motel room, where Randy quickly makes nice with the maid, Catalina. Earl decides that he will write out a list of all of the bad things he's done and sets out to right his wrongs. He starts with #136, being a litterbug. Right after throwing away garbage in the motel parking lot, the winning lottery ticket appears at his feet. "Son of a bitch, it's working!" Earl makes his way down to #64, Kenny James. He had picked on Kenny relentlessly in elementary school and has set out to make it up to him. After an incident with Kenny's parents, Randy finds out Kenny's address and the two drive off to see what they can do for him. They discover that although he has "a good job as an assistant manager of the CopyHut, a powder blue LeCar he took pride in and the nicest house on the block," he has no one to share it with. Naturally, Earl sets out to get Kenny laid. Earl pays Patty, a daytime hooker, to go to Kenny's house and have sex with him. Under the ruse of Greenpeace, Patty goes to work, only to be rejected. Earl and Randy go inside to see what the deal is, only to discover that Kenny is gay. Earl flees from Kenny's house and marks him off the list due to "special circumstances." Right after he marks Kenny off the list, his ex-wife Joy hits him over the head with a telephone in his motel room. Joy threatens him, demanding half of his $100,000 prize money. Earl writes it off as karma again and decides to take another crack at helping Kenny. Earl settles on taking Kenny to a gay bar in the city to boost his confidence. Once the three (Randy went along because Earl didn't want to be the only straight guy in a gay bar) went into the club and Kenny saw someone he liked, he realized that if Earl, the one person he's been most terrified of, will accept him for who he is then everyone else should, too. He leaves with his confidence fully intact and Earl leaves with one more entry marked off his list. 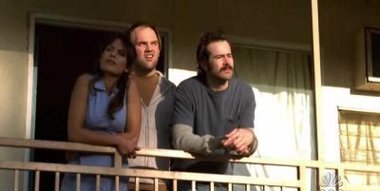