Monster Man goes behind the scenes of one of Hollywood's most respected monster prop building workshops. For more than thirty years, when studios want a bizarre creature or out-of-this world alien, they've turned to Cleve Hall and his very unique family business. Only the horrifying monsters they build match the craziness of this extremely talented family. Monster Man follows Cleve Hall, his daughters Constance and Elora Hall, his ex-wife Sonja Maddox-Hall, best friends Roy Knyrim and Johnny Saiko, as well as office manager Cindy Miller, as they bring the movie world's most imaginative creatures to life. Cleve Hall has been in the prop design game since he was a teenager. Monsters are his specialty, which fits the personality of a man who dresses in all black and drives a hearse. Hall has created masterpieces for countless big budget flicks for Paramount Pictures, DreamWorks, Warner Bros and Disney, including favorites How to Train Your Dragon, Syfy orinial movie Sharktopus, Ed Wood and Pee Wee's Big Adventure. Hall has also lent his talent to numerous television programs including Yo Gabba Gabba, for which he received an Emmy nomination. Additionally, he has worked with rock bands including KISS, creating Gene Simmons' Demon Armor, as well as Insane Clown Posse, Alice Cooper, Tenacious D and DEVO. 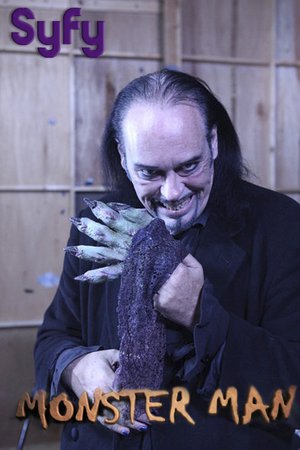