The Steam Ninja Scrolls: Potato Chips and the Giant Boulder!!

In the midst of the mission, Mirai happens to meet a young girl, Tatsumi, who is travelling around the hot springs in order to hold a memorial service for her deceased mother. Mirai, Kakashi and Gai decide that she’ll travel along side them. They are headed towards a village that has a so-called ‘Secret Hot Springs’. However, the main part of the secret hot springs recently became blocked by a huge, fallen rock. The villagers don’t know what to do about it, but Mirai wants to help them. Even though they’re shinobi, there’s nothing that can be done; They fully realize that they’re powerless to do anything about it on their own. But then, someone appears who will fix it?! 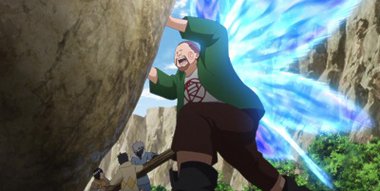