Mitsuki refuses to return to the village with Boruto and the others, and instead wish to continue on with Kokuyō’s group. During this, Sekiei’s become more ill, and his condition also worsens. In order to help the suffering Sekiei, Kokuyō heads in the direction of their comrades, and during this time Sekiei says to Mitsuki “I want you to teach me about humans”. Around this time, Kurotsuchi, the Fourth Tsuchikage, is looking after her grandfather, Ōnoki, who’s health is in shambles, when she is attacked by a group of unidentified people. 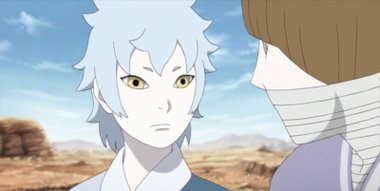