After escaping the Temple's forces, Clain is forced to earn his keep aboard the airship by doing odd jobs. He notices Sanko with her visor on while playing with someone, whom she claims is Nessa. But when Clain checks, Nessa is nowhere to be found. Later, Clain encounters Phryne and tells her that he believes that Nessa is still around, but she will not appear. Phryne answers that it is because Nessa is jealous as she has become attached to Clain. Soon, the airship begins to experience problems and flies into a thunderstorm, which Clain believes is Nessa's doing. The crew begins looking for Nessa, which turns into a game of hide-and-seek. Thinking that Nessa will not come out while she is around, Phryne attempts to escape the airship. Though Clain tries to talk Phryne out of it, it is Nessa who "finds" Phryne and convinces Phryne to stay.

Next episode
S01E06 - The Farthest Town 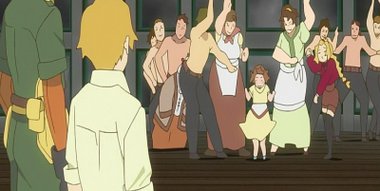