While the airship undergoes repairs, Clain and Phryne encounter refugees who found themselves outside the range of Fractale's signal. During an argument between a refugee and man who had taken pictures while Phryne was skinny-dipping, a man named Dias appears and invites the refugees to a nearby town. The photographer runs off and Clain follows him and learns that the man is an antique collector. The collector invites Clain to return that night, which Clain does with Phryne in tow. Along the way, they see Dias's group feeding and vaccinating the refugees. The two arrive at the collector's home and the collector temporarily boosts Fractale's signal to show what the town looked before the signal was lost. However, the refugees learn that the "vaccinations" were actually removing the terminals from their bodies. When a refugees attempts to flee, Dias has him killed. Afterword, the collector gives Clain the camera. 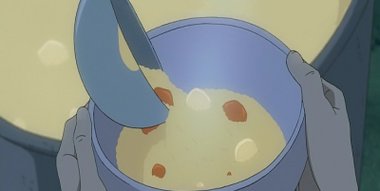