Secret of the Underground

With Clain and Phryne in custody, the Temple airship arrives at an underground base and Barrot demands that he check Phryne's virginity. Meanwhile, Sunda enlists the aid of Dias for a rescue mission. Clain wakes up to find a girl who resembles Nessa and claims to be Phryne, who then takes him to a room that contains other clones like her. While Phryne is about have her exam, Nessa interrupts in a rage before storming off looking for Clain. Phryne follows Nessa and the two meets up with Clain. The three discover a room were the clones being destroyed. Seeing the clone that helped him earlier, Clain attempts to save her before the Temple forces arrive. Sunda and Dias begin their attack on the base and with the help of Nessa, break through the defenses. However, Dias charges in and destroys the base. But not before Clain and Phryne find shelter with help from the clone. 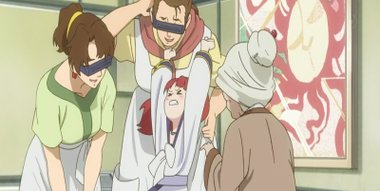