Ash and Goh are visiting the Fighting Dojo in Saffron City, where the Karate Master has just suffered a rough defeat at the hands of Bea, a stoic Fighting-type Gym Leader from the Galar region. Eager to raise his World Coronation Series ranking and continue his winning streak, Ash challenges Bea to an official battle. Ash’s Pokémon have trained hard, but Bea and her Pokémon prove to be an unexpected challenge. After Bea’s Hawlucha takes down Ash’s Farfetch’d, Riolu is eager to jump in; however, Bea’s intimidating Grapploct overwhelms it and wins…handing Ash his first Pokémon World Coronation Series loss! 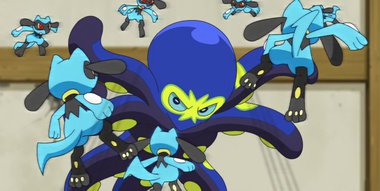