The Other Side of the Moon

Boruto and Sarada have snuck out of Konohagakure to go look for Mitsuki despite the village being on high alert. Seeking clues on Mitsuki’s whereabouts, the two head toward the lab of his so-called “parent”, Orochimaru. Boruto manages to catch the guards off guard and sneak through the entrance into the lab. Upon seeing what lay within, together with what he heard from Orochimaru, Boruto realizes that he actually doesn’t know anything about Mitsuki. Around this time, the village figures out that Boruto and Sarada are missing, so Shikadai and the rest of Team 10 are entrusted with the task of tracking them down. 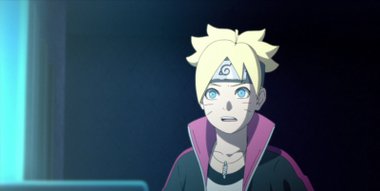