After suddenly being attacks by Mitsuki, who he brought from the Village of the Hidden leaf and taking massive damage, Kuu escapes. Chasing after Kuu, Boruto and Sarada is blocked by Kirara. On the other end, Sekiei, who witnessed what has been going on and believed that Mitsuki is his friend is stunned by Mitsuki’s actions, and becomes confused, and attacks Mitsuki. Mitsuki does not want to fight Sekiei, and tries to stop Sekiei, however Sekiei completely shuts Mitsuki out. 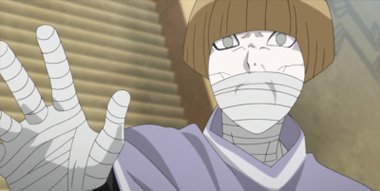