With the sanctuary all sludged up, Star and her mom flee and find a new hiding place at Buff Frog's. Star wants to sneak out to fight, so she gets Buff Frog to distract her mom with some Mewnian board games such as Puddle Defender, which Buff and Moon find have a biased perspective towards the monsters instead of the Mewnians. After a heated argument, Buff Frog sides with Queen Butterfly and forbids Star from leaving. However, Buff's youngest tadpole Katerina later sneaks Star out. 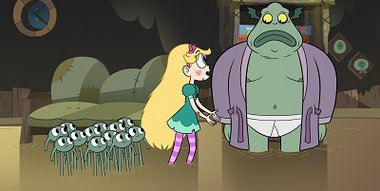