Yami is summoned to the Golden Dawn so Captain Vangeance can apologise for Langris injuring Finral. Vanessa leaves to visit Finral, Magna leaves to train alone and Charmy leaves to search for new ingredients. Gauche, Grey and Gordon remain behind. Gauche becomes interested in why all the rooms keep rearranging and recalls stories Charmy and Vanessa told of seeing a ghost. The base is suddenly attacked by zombies summoned by Rades Spirito, along with Sally and Valtos. Gauche destroys the zombies before learning from Sally that Licht has forbidden them from killing him. Sally reinforces one of the zombies, making it more powerful, but it is destroyed by Gordon’s poison magic. She tries to attack with her gel salamander, but Grey uses transformation magic to turn the gel to crystal, which Gauche shatters. Rades summons a new zombie, No. 0 Mikael Caesar, which is made from the corpses of two squad captains and uses both Wind and Plant magic. Zombies swarm into the base, infuriating Grey and Gordon, who consider the base to be their real home, and they both speak loudly and clearly for the first time that they will protect it. An alarm suddenly sounds from the base which violently rearranges itself in response to being invaded, revealing a mage with long, light blue hair concealed inside, who demands to know what is going on. 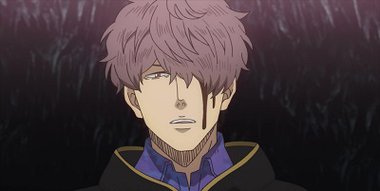