Mael has become a strange figure by fusing with four bans. King was temporarily cornered in front of Mael's mighty power, but he awakens as "Fairy King Harlequin" and wields his true power. King, who can now activate multiple spirit spears at the same time, finally hunts down Mael. However, Gowther regrets his actions and seeks a chance to save Mael. Gowther then chose to "invade" and confront Mael's spiritual world. 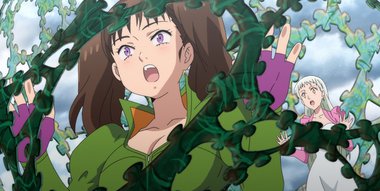