Burn It into You

Langris manages to send several spatial attacks past Zora's trap, but Zora reveals he had inscribed a trap onto his own body and Langris' spells are reflected back at him. Langris survives using even more powerful magic while Zora is left exhausted. Langris boasts of his superiority and attacks the weakened Zora but has his spells nullified by Asta in his demon form. Asta admits he admires Langris' abilities but has no respect for his forgetting that the exam was supposed to be about working together. Langris tries killing Asta but is knocked out, causing his crystal to be destroyed. At the same moment Asta's own crystal falls apart and their match is declared a draw. As always Zora both mocks and gives advice to everyone, including himself for not trusting his teammates. Asta passes out surrounded by all the magic knights who agree they must work together. The next match is Luck's team against Captain Rill's. Luck, Klaus and Puli combine their magic into a super-fast lightning arrow, but Rill redirects it, destroying their crystal instantly. In the next match Yuno beats the opposing team by himself without help from Noelle or En. The Wizard King announces that the final match will be Yuno, Noelle and En versus Captain Rill's team. 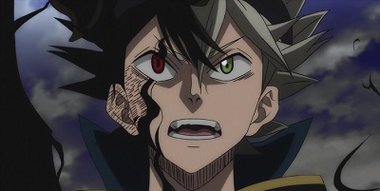