Storming the Eye of the Midnight Sun's Hideout!!!

Asta and Noelle visit Leopold in hospital where Fuegoleon is still in a coma. Having both received encouragement from Fuegoleon Asta and Noelle swear to defeat the Midnight Sun on his behalf. Asta shares his confusion with Noelle about something Vetto said about not being able to forgive humans. Klaus warns them to be vigilant against the Midnight Sun's spies, though as they leave a shadow attaches itself to Asta and follows them. Klaus worries that despite being the strongest knights in the kingdom; most of the Royal Knights are also some of the worst troublemakers, such as Luck and Zora. The shadow attempts to spy on Mereoleona but she spots and exposes it as a spy whom she captures and interrogates. She decides they will attack the Midnight Sun in the morning rather than in three days, though Zora suspects she always intended to do so. To infiltrate the Midnight Sun's hideout they split into teams with orders to reach the centre by any means necessary. Mereoleona teams up with Asta and Zora. As the battle begins Rhya decides to join the battle, activating the Third Eye in his forehead while secretly revealing Licht is not in the hideout but is somewhere else entirely. 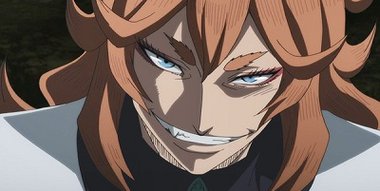