Clain and Nessa catches up with Sunda and tells him that Phryne had returned to the Temple. While Phryne confronts Archpriestess Moeran, Sunda and Clain take a mini-airship and enter the Temple. But Moeran, who is also a clone, hates Phryne because of the younger's greater importance and attempts to strangle Phryne. Meanwhile, Nessa, who remained on the Danan, begins to loose form. After a message from Dias, Enri decides to enter the Temple with Nessa so that they can join Clain and Phryne. Phryne escapes from Moeran during the commotion while Clain, Sunda, Enri, Nessa, and Dias meet up. Although Dias encourages Clain and Nessa to search for Phryne, his real goal is to kill Phryne. Phryne encounters Dias's soldiers but barely escapes before finding Clain and Nessa on the other side of a transparent wall. However, Barrot appears on Phryne's side and claims that he and Phryne are bound together. 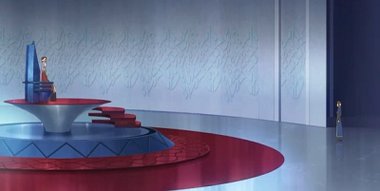