After collecting the last 4 Eliatrope Dofus', Percidel uses his powers as the Iop God to erect a massive sea wall to keep the flood waters out. Immediately after doing that, however, he says goodbye to his family to go and fight Ogrest to stop future disasters. Yugo volunteers to go after him with the 6 Dofus', but Adamai, taking Madame Shroud words to heart that such a fight would end the world, takes a Dofus and flees. Yugo chases him, claiming that Shroud is filling his head with lies. Adamai refuses to believe that, believing that this fight is still a horrible idea. The two brothers have a fight before Yugo claims the Dofus. Adamai says they are no longer brothers before departing for good. With all 6 Dofus' in hand, Yugo, with Otomai tagging along, head to Mount Zinit to aid Percidel. They arrive just in time, but Ogrest taps into the Dofus' he has in his belly, bringing out the Dragons inside them to aid him. Yugo uses his powers to send their battlefield into space to avoid destroying the world. That, however, may prove to be their downfall as the Mountain is enormous and shards that break off from teh fight rain down on the world like meteors. 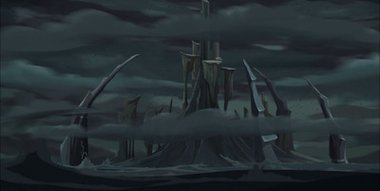