Kabwe Carillon's team of Devil Banishers returns to Bow Nokude's house in Tiulyu. They report to the other team about their failure to capture Asta. Gordon Agrippa and Noelle Silva take Asta to Owen, who discovers that it was a sleeping potion. Yami drags Marx Francois into the room so they can look into Asta's memories of the attack. Meanwhile, Gauche threatens Sister Theresa for allowing Marie to fall into danger a third time. Thinking it has do with Kira, Gauche and Finral barge into the chairman's office, blasting a hole in the wall. Damnatio then forces Gauche and Finral to their knees, but Yami barges into the office, breaking another wall. Nozel Silva enters the office and shows that the signal from Asta's monitor bracelet has appeared in Tiulyu. They figure out that Secre removed it from Asta so that she could be tracked. They fly to the town and split up into teams of two: Gauche with Gordon, Nozel with Noelle, and Yami with Finral.

Next episode
S01E144 - Those Who Wish to Destroy Devils 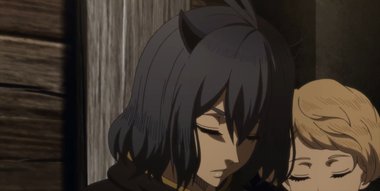