After John Abruzzi loses his power to control the prison industries (PI) when Philly Falzone ceases to pay Captain Brad Bellick, Michael Scofield and the other escape team inmates watch helplessly as PI is taken over. Abruzzi tells Michael the only way out is to tell his gang he still has control - and that means giving up Otto Fibonacci to them. Michael doesn't want to give up an innocent man's life, but ultimately hatches a plan with Abruzzi. Abruzzi's mob gang visits him in prison, then demands to know how Michael figured out the location. Michael explains that he did his homework - before they go into witness protection, they are in the custody of a local sheriff. Only one was out of town during Fibonacci's custody, and he made a lot of calls to his wife, which Michael intercepted. Pb fibonacci Fibonacci Abruzzi's Mobsters goes after Fibonacci, who they believe is in Canada. However, the RCMP cracks them before the assault. Fibonacci picks up a copy of a Kansas newspaper in the meantime. Abruzzi confronts Michael, asking him how he feels. Both men are pleased with the results, but soon fall mysteriously ill. During a scene in the C.O. break room, Michael, Lincoln, Abruzzi and Sucre reveals where they want to go after they have escaped. Abruzzi says Sardinia, Sucre says he wishes to get back to Maricruz, and Michael quietly says to Lincoln that together they will go to Darien Gap, Panama to live and perhaps run a scuba shop. Meanwhile C-Note has noticed the disposition of cement from the break team. He offers the new head of P.I. $150 a month to work with them. It is accepted. C-Note then uses his brains to figure out the escape plan. Once he finds the loose cement in the shack, he knows of the escape plan. 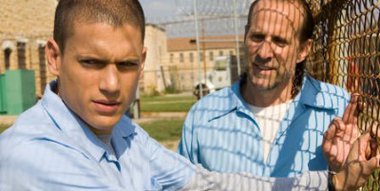