Several years later both Yami and Vangeance were promoted to vice-captain while their former captain became the Wizard King. The Wizard King asked Yami and Vangeance to deal with a bandit group, hoping to identify a traitorous magic knight. Vangeance spread false information, limiting the number of villages the bandits could attack to only two and sent Yami to one while he went to the other. The bandits attacked Yami’s village and Yami found himself facing the bandit leader who escaped years ago, now armed with a powerful magic staff. Yami defeated him regardless but was trapped by two traitorous magic knights, Goht of the Crimson Lions and Mohl of the Silver Eagles. They attempted to kill Yami to cover up their crimes but Yami was rescued by Vangeance and they defeated the traitors. The Wizard King promoted Yami and Vangeance to Squad Captains. Yami decided to only accept hooligans and outcasts and formed the Black Bulls while Yami formed the Golden Dawn and only accepted strong nobles. Asta fails to see the point of Yami’s story, to never quit no matter how many times Yuno beats him, and is punished for being an idiot. Asta regains his former spirit and joins the other Bulls waiting for the exam results, only for the sudden and violent arrival of Mereoleona of the Crimson Lions.

Next episode
S01E87 - Formation of the Royal Knights 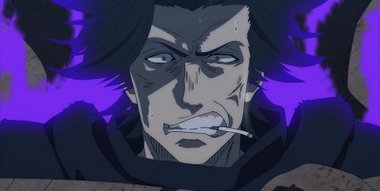