The Black Bulls Captain vs. the Crimson Wild Rose

While the Royal Knights were infiltrating the floating dungeon base of the Eye of the Midnight Sun, something strange was happening in the Clover Kingdom. The devil’s skull back in Asta’s home of Hage started to shine, and a number of people throughout the kingdom also started to shine. This was due to the power of the stolen magic stones and Licht activating a reincarnation spell. As Captain Yami was trying to find out more about this phenomenon, Marx and Owen appear in front of him. They then call themselves elves and attack Yami with an incredible amount of power that they’d never shown before. Meanwhile, Captain Charlotte also... 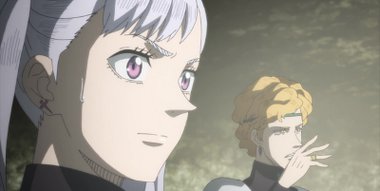