Riots, Drills and the Devil (1)

Since Scofield's transfer was cancelled, the woman in Montana tells Kellerman to take care of Burrows quickly. He has an informant call an inmate in Fox River to kill Lincoln. The only form of identification of the inmate is an elastic bracelet. Veronica (Robin Tunney) avoids Nick Savrinn, until she realises that he is trying to help her all along, when he hears that the anonymous phone call to arrest Lincoln came from Washington D.C. Meanwhile, Michael (Wentworth Miller) realizes that to complete a digging job inside the walls to some pipes, he needs to spend a good block of time there, which has been proving difficult as he has to keep coming back to his cell to make count. After explaining this to Sucre (Amaury Nolasco), he is told that the only time count doesn't take place is during a lockdown. Michael manages to disable the prison's air conditioning. T-Bag (Robert Knepper) returns from the infirmary, where he is given a new cell mate, Seth. Since the A/C is off, the inmates suffer in the heat, leading T-Bag to start a fight with Geary, who then initiates a lockdown while some of the prisoners are out of their cells. The prisoners riot and break into the prison cell control room, in which T-Bag opens all the cells and then finds a set of keys, giving him and the rioters access to the entire prison. When news of the riot reaches the sick bay, the prisoners there also riot. After taking out the guard, they trap Dr. Tancredi (Sarah Wayne Callies) in the adjacent room. Michael uses a tracing of a devil from his tattoo to provide the coordinates (calculated using Hooke's law, also referred in this episode as hooker's law) needed to collapse part of the wall. This is vital to his escape plan as the wall prevents the team from entering a pipe that will take them to the infirmary. Meanwhile, after Lincoln is ambushed by T-Bag and his men, he holds new CO Bob Hudson hostage, who tries to escape, but T-Bag takes him to Michael's cell, where he learns of the escape plan, and blackmails Abruzzi (Peter Stormare) into getting in on the plan. Outside, the COs plan on stopping the riot, where Pope receives a call from Governor Tancredi, who is coming to Fox River. Michael soon notices Dr. Tancredi's plight on CCTV and goes to rescue her through an air duct. Meanwhile, Charles Westmoreland stumbles upon a battered Lincoln and alerts him of the situation. A distraught Lincoln demands to know where Michael is. When Westmoreland is unable to answer, another prisoner named Turk steps forth to lead Lincoln to Michael, but it is revealed he is the inmate ordered to kill him. 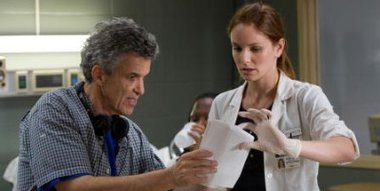