Riots, Drills and the Devil (2)

Turk misleads Lincoln, by sending him into a secluded area, where he attempts to kill him. However, after the two men struggle, Lincoln pushes Turk over the edge, where he soon dies. Back in Michael's and Sucre's cell, T-Bag is keeping an eye on CO Hudson, who knows of the escape plan. Abruzzi enters the hole and helps Sucre with breaking down the wall. Sucre, a devout Roman Catholic, struggles with drilling through a depiction of the devil. Also adding to the dilemma is the fact that gas pipes lie behind the wall, and that drilling in the wrong place may cause a fatal explosion. However, together they are eventually both able to drill strategically placed holes and manages to break it down to see the pipe on the other side. Sara is still trapped in the room, where the rioters almost break through, and try to set fire to it, where Michael manages to arrive through the vents and rescues her from them. However, the rioters follow her and Michael, who try to evade them. Sara asks how Michael knows about the pipes and he replies by saying that he has had PI duties to clean up toxic mold in the pipes. Soon, Michael is able to knock out one of the leading inmates and rush to an exit. However, when they arrive, a sniper, sent by Govorner Tancredi, who is adamant to do what it takes to rescue his daughter, aims at him. Michael quickly ducks as the pursuing inmates are fired at and Sara reunites with her father. Veronica and Nick arrive in Washington D. C. and receive the address from the placed phone call, a payphone. The payphone is next to the building of the company the Vice President uses. The phone rings and Veronica answers it. The caller tells them that they are dead. In a panic, Veronica and Nick run away from the payphone. Michael returns to gen-pop and reunites with Lincoln before heavily armed SORT teams invade the prison and force the inmates back to their cells. In Michael's cell, the team discuss what to do with Hudson. Michael, Lincoln and Sucre want to keep him alive. However, as he leaves, T-Bag kills him anyway, stabbing him in the stomach and throwing him down from the second level. Later, Sara asks a colleague why PI was ordered to clean up the toxic mold. The colleague replies that PI has never done such a job, which tells Sara that Michael's story was a lie. In the end, the prison is returned to normal and Michael can continue with his escape plan. 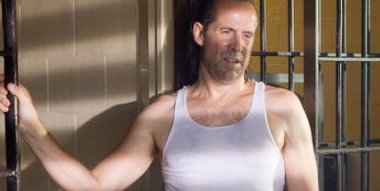