Adar gathers all the Orcs. After a speech reminding them of their work, he announces that the fight will not be in vain. They head for the Watchtower, where they find no one. Arondir hides before starting the attack, alone. He sets a trap for them and runs away. The Tower collapses on the Orcs. In the distance, the villagers celebrate the victory.

In the direction of the Middle Lands, the troops sleep peacefully. Isildur wakes up to see the Lands and crosses paths with Galadriel, who realizes that he is not worthy of this journey.

Bronwyn prepares the village for the coming arrival of the Orcs. Traps and weapons are set. She and Arondir wonder about the coming battle. And it was during the night that the Orcs landed in front of the fearful villagers. If the first traps work, the Orcs quickly get the upper hand. Arrondir finds himself in trouble with one of the creatures.
Finally, the Orcs are defeated, but Arondir notices that behind some of the enemies were humans. A second attack surprises the villagers and Bronwyn is wounded.

Galadriel and her army finally arrive in the direction of the village to save Arondir and his people. She chases Adar. 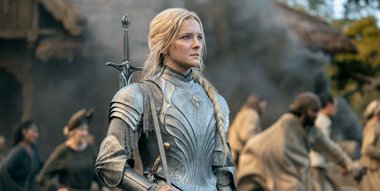 If you're a TV show addict, you know how hard it is to stay updated conveniently in your watchlist. Between the holidays and the shows that return out of the blue, sometimes it's a mess.

In 10 years of existence, BetaSeries has become your best ally for TV shows: manage your calendar, share your latest episodes watched and discover new shows – within a one million member community.