As Nick and Hank turn their attention to a string of attacks where victims are left without their memories, Nick weighs whether or not he should regain his Grimm abilities. Trubel joins the investigation and puts herself in harms way. Adalind is held captive and learns that she is more connected than ever to Nick. Captain Renard continues to fight for his life as a mysterious visitor arrives to help him. 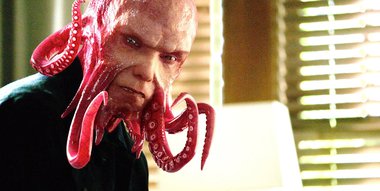 S04E07 - The Grimm Who Stole Christmas