The Dealer of Destruction!

Professor Kukui has announced the formation of the Alola Pokémon League, and the excitement is overwhelming! Ash and friends want to enter, but someone else is determined to keep the event from launching—Guzma, the mysterious and menacing leader of Team Skull. He confronts Professor Kukui, vowing to destroy the Pokémon League, and Ash takes the opportunity to challenge him to a battle. Guzma’s Golisopod holds its own against Pikachu, but when it suddenly returns to its Poké Ball, the match ends, and Guzma returns to Team Skull’s base. Just what is the relationship between Guzma and Professor Kukui, and will the Alola Pokémon League become a reality? 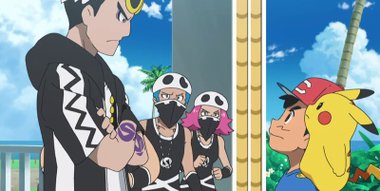