The Alola Pokémon League is underway, and it promises to be full of action, drama, and surprises! The qualifying round is a Battle Royal competition among 151 different Trainers, and only the top 16 will make it to the next stage! A free-for-all ensues, with our heroes battling against and alongside friendly rivals like Pikala and Hiroki as well as returning foes like Viren’s cronies and Plumeria from Team Skull. When the dizzying action finally winds down, the entire Pokémon School class, Hau, Gladion, and even a disguised Team Rocket are among those left standing! Now, the question is: who will make it all the way to the top? 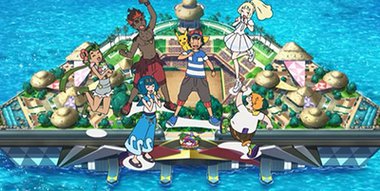