The wayward Guzzlord have been sent back through their Ultra Wormholes, and it’s time for Ash, the first Alola Pokémon League Champion, to have his exhibition match against the Masked Royal! Of course, the Masked Royal’s true identity has been revealed, and everyone is excited to see Ash take on Professor Kukui. The six-versus-six Full Battle begins with Professor Kukui’s Incineroar going up against Ash’s Torracat, but you can bet that the match will take many twists and turns before a winner is decided! 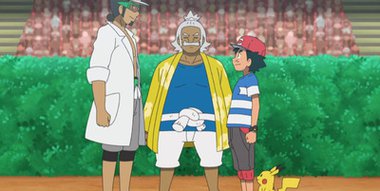