Sophocles and Vikavolt are entering a Vikavolt race! When they arrive, Sophocles learns that his rival Horacio is also competing with his newly evolved Vikavolt. The entrants get off to a rousing start, but when Sophocles enters the cave route, his fear of the dark leaves him petrified. Vikavolt offers him support, leading him to realize that if his Pokémon is determined to press on, he can be courageous as well. After an interruption by Team Rocket, the race is back on, and Sophocles wins by a nose! He receives a Buginium Z as a prize, and Hapu follows up by giving him a Z-Ring! 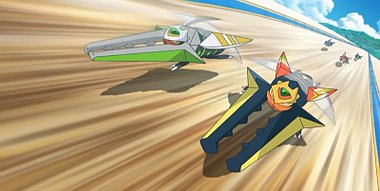