Excitement is building for the upcoming Alola Pokémon League, and the Pokémon School class is ready to train! Ash, Kiawe, and Sophocles decide to camp out at Kiawe’s family farm, but Sophocles is having a hard time working up the confidence to pull off a Z-Move. To help Sophocles train, Kiawe secretly enlists the help of a wild Crawdaunt who previously clashed with Turtonator. Crawdaunt launches a surprise attack on Sophocles, but Sophocles manages to overcome his fear and launch a powerful Z-Move with Vikavolt! The circumstances of the battle may have been unusual, but Sophocles is feeling more confident with a Z-Move at his command!

Next episode
S18E124 - Living on the Cutting Edge! 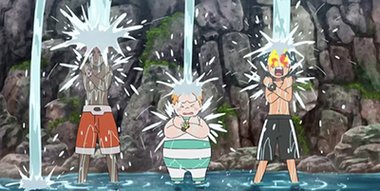