Four Trainers are ready to compete in the Alola Pokémon League semifinals: Ash, Gladion, Guzma, and Kiawe. Mimo has come to cheer Kiawe on, but after getting lost on the way to the stadium, she is confronted by Team Skull! Gladion saves the day—and then goes on to battle her big brother! The first match of the semifinals reflects much hard work and skill by both Trainers. When Marowak is knocked out, Kiawe brings out Turtonator—and when it defeats Gladion’s Lycanroc, he calls for the mighty beast Silvally! Now it remains to be seen who will emerge victorious and move on! 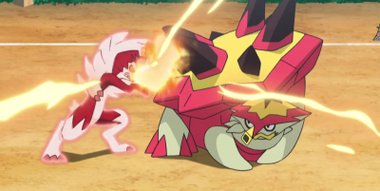