As Ren identifies three more Neathian moles (Mason Brown, Jesse Glenn, and Zenet Surrow), Princess Fabia from Neathia arrives in Bakugan Interspace looking for the recipients of the message she sent. Dan, having slept in, rushes to Bakugan Interspace and runs into Fabia, literally. Fabia learns that he is the top brawler in Bakugan Interspace, but before she can ask about her message, Dan rushes off to meet his friends. He tells them about the girl and Ren suspects she may be a Neathian spy. Before they can track her, Fabia arrives and is shocked to find that Ren, a Gundalian has gained their trust first! Now that Dan has sided with the Gundalians, Fabia claims they are her enemy and a battle ensues between her and Dan. Dan quickly takes the lead but falters when Fabia summons Haos Aranaut, the original Aranaut from which the clone Aranaut, Coredom, Hawktor and Akwimos originated, meaning Fabia sent the Phantom Data. This also means that it came from their enemies, the Neathians, something that Shun is not so sure of anymore. Defeated, Fabia leaves and wonders what to do now that Dan has sided with the Gundalians. While the others congratulate Dan on his victory, Shun disappears to ask Fabia what her side of the story is. 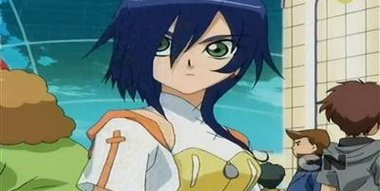