With only one shield left defending Neathia, it looks like Gundalia may actually win this war. However, Marucho devises a plan to distract the oncoming Gundalian attack consisting of Airzel, Kazarina and Stoica, while a small unit consisting of Shun, Dan, Fabia and their bakugan head to the second shield generator to restart it. Marucho and Jake act as the decoys while Fabia leads Dan and Shun to the generator. When the battle gets too intense, Marucho and Akwimos trap Strikeflier and Avoir in ice and escape, while Fabia, Dan and Shun get closer to the generator.

Next episode
S03E17 - Battle for the Second Shield 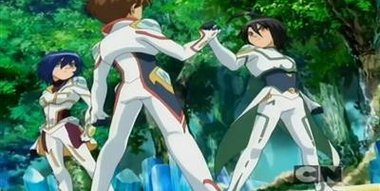